Tomorrow, pesky access-blockers may be back, but today belonged to the people who have rights on Mynydd Eglwysilan Common: commoners, byway drivers and trail, quad and pedal bikers, horse riders, walkers, roamers were all there to let the landowners know they have had enough of illegal blocks and actions.

Things were bad in 2012, when I first posted about the common https://ossjay.wordpress.com/2012/09/04/what-is-going-on-around-eglwysilan-common/, and have got worse since the changes of ownership in December 2015 and April 2016.  Today was a good day, and a huge THANK YOU to Bonkas 4×4 Wales who got everyone together and a lot more. 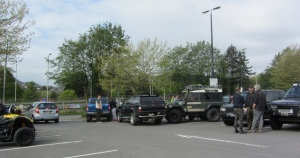 I joined them at the B&Q car park in Pontypridd, and caught up on some problems, such as commoners fearing to graze their stint because of losing stock. We drove up Penyrheol Ely Road in a convoy of over 20 from the town to the wild beauty of Eglwysilan, where horses and protesters were already there – almost a hundred in all.

To access the byway which leads to Nelson, we needed to move the blockage.  The Bonkas guys had brought shovels.  To be honest, they did most of the work, while everyone else was admiring their expertise and co-operation. 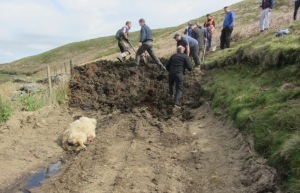 The blockage of shit stank, but more evil was the mafia-like sheep, beheaded and its guts falling from its slit abdomen.  It was there to greet the first arrivals, with all identification carefully removed.

Because this is classed as a protest rather than a gathering, the police had to attend in numbers, and were drafted in from Talbot Green.  This wasn’t a problem, in part because they were able to hear and see the agreed problems of the common.  A few of them knew the common too.  Maybe they can send the bill to those responsible for blocking access. 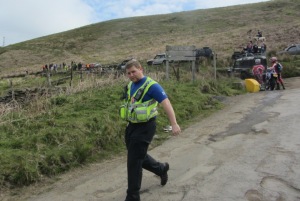 The shit proved nastier than first thought when a 4×4 couldn’t get over it and was towed back, then bottomed out on a boulder.  There are good YouTubes and shots on Facebook of a long process. 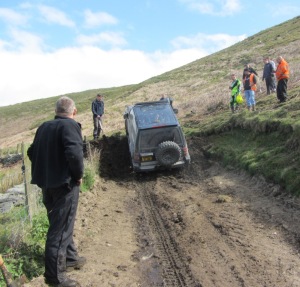 One quad bike got over, another stuck.

Some cyclists were helped to get past the shit. I finally got a nice shot of a leaping 4×4. 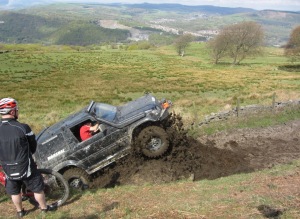 Time went by as the boulders and tree stumped required three vehicles in line to winch them out.  Time to take in the Valleys views around the common. 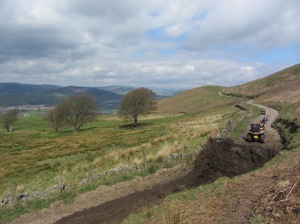 Finally the byway was open again, and the convoy could set off.  It was proof that we have far more to gain from all the different types of users working together.  I was sorry that I couldn’t stay longer. 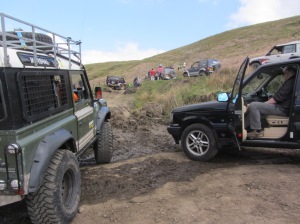 I expect there will be more to do either personally or as Open Spaces Society representative for Rhondda Cynon Taf, with Welsh Assembly members aware and involved and the police keeping in close touch with the Rights of Way officers in Caerphilly and RCT.

The Open Spaces Society has several actions on commons which the Welsh Assembly might consider.  Most important is the need for local authorities to be responsible for – to have a duty to take – action against unlawful works.