Should this be a footpath? Abercynon 3 gets a visit

As the Open Spaces Society local correspondent, I went to look at a footpath in Tyntetown, north of Abercynon. Rhondda Cynon Taf CBC is considering extinguishing the path which seems to have been ignored when the Bryntirion estate was built over half a century ago.

Unfortunately, planning departments have not always checked properly about the rights of way on the Definitive Map when deciding an application, and there are historic cases of paths through houses.  Open Spaces Society is one of the statutory consultees only when there is a proposal to change our rights of way network, and this was a preliminary look to make (hopefully useful) comments to the Rights of Way Officer, who is expected to clear up the planning mess.

Bryntirion is above the old village, which dates from the 19th century. We parked on Main Road and walked down to the Tynte Hotel pub opposite a house named Central Stores which backs onto the steep mountainside.  Footpath 3 begins through a green gap in the terraces up the road and the path certainly exists. 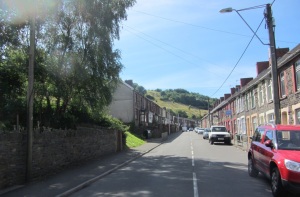 The route will need a diversion because, at the top, FP 3 should carry straight on between the gardens of houses and a steep drop to the road.  The metalled path turns slightly right and joins the road. 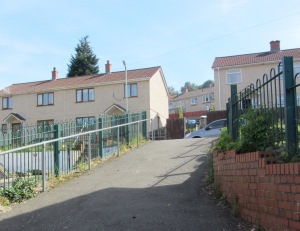 The roads are traffic-calmed and quiet in the day.

The path (on the map) runs through gardens between rows of houses, and emerges to cross a turn-off to the left from one driveway to another.

There is another metalled path down to the left off this road – I have marked a blob A on the photo (these blobs looked bigger in Paint!). Looking down that path, there is a crossing at a blob B on the next photo.  these paths are not on the Definitive Map. 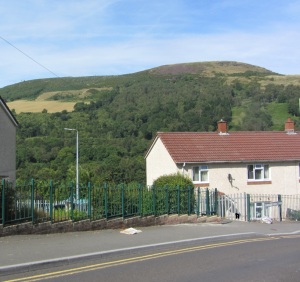 I thought that the path might be diverted along in front of houses past blob C, but, chatting to some residents, the dangers of the quarries probably make this impractical.  I like to explore options. 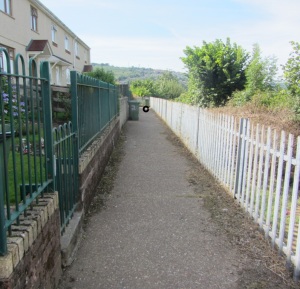 There are a number of paths not on the Definitive Map, for example one looking from blob B to D, which pass through open spaces and eventually down to the main road. 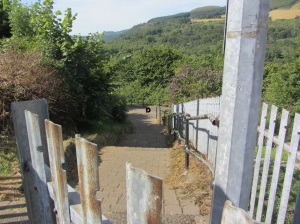 There are an attractive walk and views. 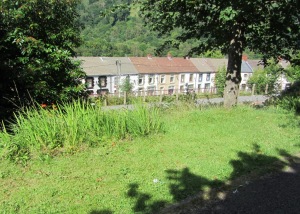 We walked back up to Bryntirion and explored the last problem, of finding a way to the open access land of the mountainside.  I would have liked to find a solution. There doesn’t seem to be any route through the houses on Bryntirion, and an attempt to find where the path 3 should have met up with Footpath 2, didn’t end well.

Footpath 2 runs from the park and playground on the main road.  Oddly, the sign for the path is pointing at a wall, which gives confused signals.

There was a way in at the end of this wall, through the play park and past the slide, but the route is soon obstructed by branches.

We scambled over a fence. I got a shout to beware, and found Mike minus a shoe and sock after going in ankle deep into what looked and smelt like excrement. 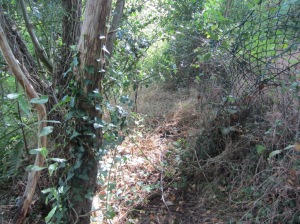 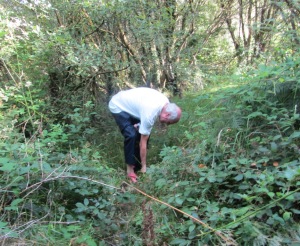 The mountainside looks lovely in the sun, but I didn’t fancy it any more and that was that.  Our Rights of Way Officer is going to have a look.