The Taff river valley in Trefforest: “The River Next Door”

I was lucky to have the company of artist Valerie Coffin Price and her landscape architect frind Bronwen Thomas on a walk in the Taff valley last week. We met at the cafe alongside Valerie’s exhibition “The River Next Door” in the University of South Wales (formerly Glamorgan Uni and before that the Miners’ Institute), and started off upwards on a path off Forest Grove (Footpath 105 Pontypridd).

Bronwen quickly corrected the wrong identification of a tree as a wild cherry – it was, in fact, an amelanchier, with delicate white flowers and brass tipped leaves (hard to spot in the photo). 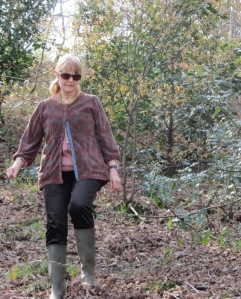 There was also a fine view over the sunlit valley.

The footpath is interrupted a few hundred yards along, which with fencing firmly across – perhaps a problem for my Open Spaces Society duties.  At home, I checked and the Definitive Map shows that the path in 1971 went up Craig y Fforest then as now.

With wood sorrell in abundance, it was very pleasant, and higher up there were areas of wood anemones, celandine and the first bluebell I’ve seen this year. 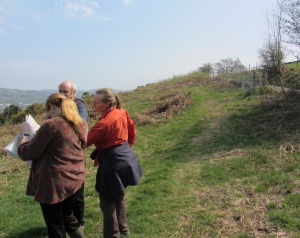 We turned back down and came out on the old A473 almost opposite the Devil’s Steps (or Devil’s Bridge Steps).  I was worried to see a Sustrans sign stating this isn’t a right of way.  It is a right of way and on the Definitive Map: it is Footpath 17 Llantwit Fardre.  It is not permissory as Sustrans have a habit of stating on their smart blue signs. 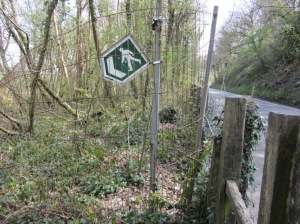 The Devil’s Steps are the way down from the road and over the beds of old railway lines which went through the university carpark. These are the steps, and the bridge over the active Valleys lines from Cardiff to Trefforest, Pontypridd and up the Rhondda and Cynon Valleys. 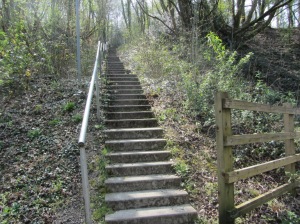 And then there is the old railway bed and drainage. 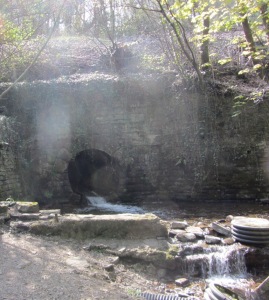 It is a fabulous place for stones and tree roots, and golden saxifrage growing over the rails. 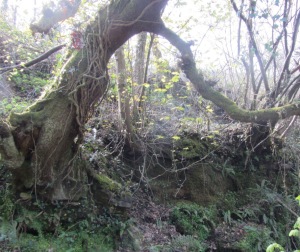 Valerie, having spent 18 months beside the river, noticed the loss of graffitti on the wall round a yard.  Time appears to remove it by simply fading.  Some new work was up further along. 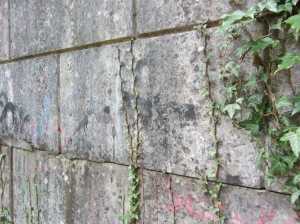 We stopped at the bridge over the river to Rhydfelin, where Bronwen was delighted with the elm flowers, and a kingfisher suddenly flashed blue under the bridge and flew upstream.  I photographed the heron which posed on a stone.

We walked between the Tin Works and the river, along Meadow Street past buttresses on The Bute.

Between Meadow Street and the river are various land-based businesses and training and the allotments. There’s was a field of ladys smock – there seems to be lots about this year.

We went back along the Bute to look over the wall and into the Tin Works and could see some impressive artwork (also noted by others) inside the derelict buildings.  Valerie is something of a connoisseur. 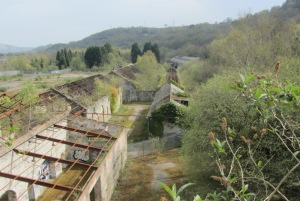 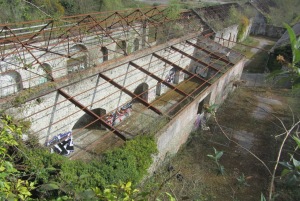 It was a leisurely stroll, taking in minutiae, and a good reminder of what goes into the poetry and art in the book “A Fold in the River” by Philip Gross and Valerie.

2 Responses to The Taff river valley in Trefforest: “The River Next Door”